while you were out... 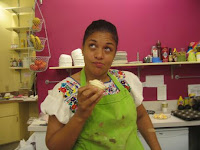 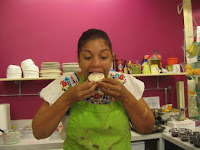 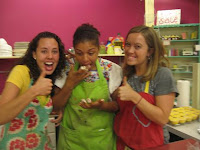 If you ever wonder what we do when y'all aren't here, here's an example:

Lucinda asked "have you ever seen anyone just eat a whole cupcake... in one bite?" None of us had, including her, so naturally a dare was born.
We figured it wasn't for real unless there was icing and sprinkles, so we doctored a poor, slightly over-baked cupcake base that we were going to have to throw out anyway and watched in fascination and giggles as Lucinda contemplated how best to embark on this culinary dare.

We debated the merits of icing first versus cake first versus going at it from the side. Finally, after much contemplation and loads of snickering, Lucinda just did it... and Amanda, Laura, and I were doubled up in laughter as she tried to fit an entire cupcake in her mouth in one go.

Oh you know, a normal Friday night at Muddy's...